The further the world progresses into the energy transition, the clearer the challenges become. More and more automakers are committing billions of dollars to new facilities and technology surrounding batteries but it seems that the pace of the transition could perhaps be too aggressive. Environmental goals from the Paris Climate Accord to commitments from individual countries outline ambitious milestones through 2050. Net-zero emissions, full banning of natural gas heating, strong EV sales by 2030. These goals reinforce the massive demand for certain industrial components necessary for electrification that the world may or may not have access to before the end of this decade.

The climate change movement has progressed so swiftly that the mining sector is being overwhelmed with demand. While investors continue to pour millions into refining facilities and extraction companies, the pace at which these projects usually develop has been challenged. Factories that process battery minerals can be constructed in an 18-month time frame, but mineral extraction operations can take multiple years to become operational. Miners have plenty of funding, but they are struggling to produce a supply that matches the demand from automakers and renewable technology manufacturers.

Carlos Tavares of Stellantis highlighted the growing concern of government involvement that continues to strain these sectors. The UK government hopes to ban combustion vehicles from being sold in 2030, with hybrids following closely behind in 2035. The US hopes that 50% of all vehicle sales in 2030 are electric. When governments draft aggressive policies outlining these milestones, automakers make commitments to aid in achieving those goals. “The speed at which we are trying to move all together for the right reason, which is fixing the global warming issue, is so high that the supply chain and the production capacities have no time to adjust,” says Tavares. “All the car companies now, at least the best ones, are now full speed ahead; in full execution mode, going as fast as they can. The only thing that really helps to deliver is stability. Stop playing with the rules. Leave the rules as they are and let people work properly.”

All of these problems don’t even begin to consider the lingering effects of the COVID pandemic. Trade restrictions, limited capacity, labor shortages, and other logistic hurdles only further exacerbate the issues in scheduling. Not to mention the ever-increasing cost of conventional energy that causes all other mined and processed metals to become even more valuable and expensive.

Each country is starting to recognize the cracks in its ability to source the materials needed for battery technology. President Biden has already invoked the 1950 Defense Production Act, not only to direct more resources to baby formula amidst the shortage but to encourage companies to source and manufacture battery and renewable technology here in the states. Unfortunately, the United States doesn’t have the same access to the required minerals that other countries do. Mexico feels that countries like the United States are exploiting their abundant resources by mining them in Mexico and transporting them back. This has led Mexico (among other countries) to embrace resource nationalism to prevent other countries from accessing their mineral deposits, instead prioritizing domestic industry.

This all culminates in allowing countries like China, Chile, and Australia to control a gargantuan portion of the mineral resources that the world desires. Even outside of a perspective of ethics and environmentalism, this poses an issue of pseudo-monopolies. If China sees greater value in allowing their domestic EV companies to utilize the harvested metals, why on Earth would they sell their neodymium to a small speaker manufacturer in the United States? If the rest of the world had a need for these resources, China controls a large enough portion of the market to ask for a certain price. Even before the pandemic, China was threatening to reduce or fully stop the exportation of rare earth minerals as their overwhelming control affords them an absurd amount of geopolitical leverage.

Battery costs for renewable energy technology had been driven down aggressively up until the pandemic. Now that energy prices are through the roof, battery prices are projected to rise for the first time in over a decade. This has caused most EV manufacturers to raise their sticker prices to account for the ridiculous increase in metal prices. 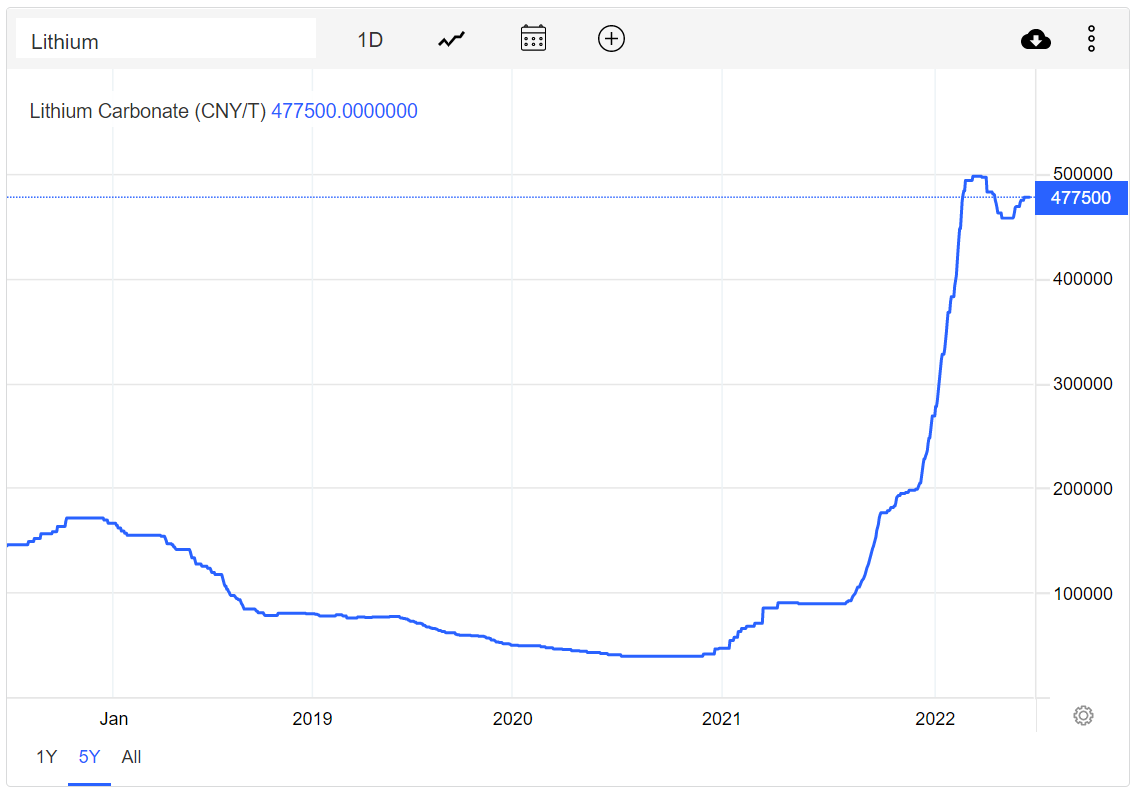 Although Lithium prices were already at all-time highs, the price has nearly doubled since the start of this year alone. The price parity between electric vehicles and conventional combustion vehicles looks to be a more distant goal despite the increase in price for both types of vehicles. The existing trade and political tensions between the US and China are certainly not helping bring down the cost of battery technology either. As energy and renewable energy components become more and more expensive, companies are delaying or fully canceling large-scale projects. Utility companies are becoming left shorthanded in funding. Vehicle companies are struggling to produce a fraction of the EVs they promise. The deeper the world finds itself into this transition, the more it realizes just how little there is to go around at the moment.

The slowdown in battery development between the EV and utility sectors has led to a myriad of project delays and cancellations. Companies throughout the supply chain are unable to satisfy the massive demand for minerals and technology that is demanded all over the developed world. This is surely the beginning of navigating a new market of commodities, but the security of such commodities is a much different story. The United States will likely have an easier time making use of its vast oil resources rather than plead with Chile for cobalt and beg China for Lithium. While it seemed that accessible EV and battery tech was closer than ever, the pandemic and sudden surge of interest (primarily in the name of the climate) may just leave the world lacking the building blocks for its vision of the future.

Related Tags: Batteries | EVs | Infrastructure
← Rigzone | What a federal gas tax holiday could mean for prices at the pump OilPrice.com | China May No Longer Be A Pillar Of Growth For Global Oil Markets →