Welcome to a new segment from RARE PETRO: Thirsty Thursday! Here we will see if we’ve been poured another tall glass of crude and whether or not the US was thirsty enough to suck down another round. It is time to grab a drink, kick back, and dive into some data!

Starting with the API report, released June 2, we can see they predicted a 2 million barrel drawdown. The actual drawdown was more than double at 5.36 million barrels!

The EIA predicted a 2.5 million barrel drawdown, but released their report a day later showing that it was also in the neighborhood of 5 million barrels.

This is on par with drawdowns we’ve seen so far in 2021 and is the biggest one since May 4 which the EIA estimated was just shy of 8 million barrels.

It seems like the drink of choice last week was definitely oil as gasoline inventories increased. The US is still technically within its 5-year inventory band, but it is dangerously close to punching through the floor. 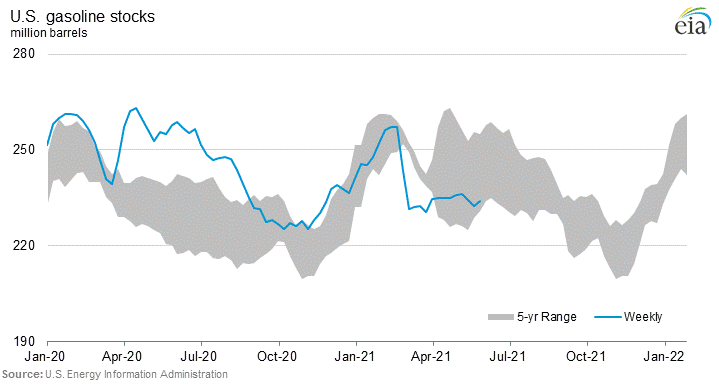 While it is balanced on this precarious perch, gasoline prices have been increasing, especially on the West Coast.

California averaged $4.20 a gallon through Memorial Day weekend even though inventories are well within regular territory. This is a direct result of California’s voting for continued gas tax increases that does not require voter approval (2018) combined with the fact that there are just way more trucks than there are people willing to drive them which leads to a supply chain bottleneck.

While the United States drank down way more crude than they did gasoline, it seems that propane is performing just how we’d expect as more people stop using it for heating and instead use it for flipping patties and dogs.

Might as well have a few burgers to go along with Thirsty Thursday! Regardless, the propane inventory is also within its 5-year range. 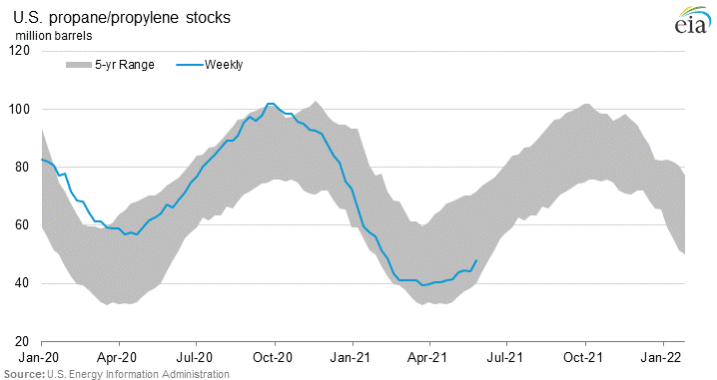 While you may be paying just a little bit more for propane right now, some people feel that a shortage could be around the corner. Turns out everyone who is still staying in due to COVID is contributing to the high demand for propane through pool heating. Not only that, but gas companies are doing their best to stock up and make sure there is enough supply should another freeze occur like Texas saw earlier this year.

Overall, things are looking good for inventories this week. Gasoline might be getting a little bit pricey thanks to reasons outside of purely having it on hand, but we sure did a number on oil. Be sure to sign up to RARE PETRO’s mailing list so that you don’t miss out on anything, and don’t forget to come back next week. We will have a cold one waiting for ya. Cheers!

All data sourced from: